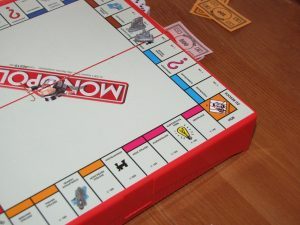 Tired of telling the truth? Monopoly: Cheater’s Edition could be just the game for you! The Monopoly: Cheaters Edition invites players to skip spaces, steal from the bank and generally get away with criminal behavior, until they’re caught. A new edition of the classic family board game Monopoly will satisfy those underhanded relatives who bend—or break—the rules to win.

“Monopoly: The Cheater’s Edition” will ask players to cheat through a new feature called cheat cards.  The cards will give players a series of tasks throughout the game—such as skipping spaces, avoiding rent payments and even committing bank robbery—rewarding those who succeed with extra money and free properties.

Are you a ‘Monopoly’ cheat? This version is for you. This new game encourages players to get ahead in any way they can. Monopoly Cheater’s Edition rewards your dishonest loser friends. Ever try to palm a few extra bills when playing the property game? This version’s for you, and it even comes with handcuffs.

Everyone knows a shameless board game cheat or two. In fact, some of us see it when we look in the mirror. Monopoly can bring out a lot of moral flexibility in a player and Hasbro understands the temptation.

Despite the old saying, sometimes cheaters do prosper. This famous board game has emerged, so your sticky-fingers family member can rejoin game night.

Ever steal from the bank or quietly collect some extra cash while passing Go in Monopoly? Toy giant Hasbro knows you have, which is why they plan to release a version of Monopoly called the Cheaters Edition this fall in the U.S.

The game features naughty tasks to complete, such as skipping spaces or removing another player’s hotel from their property without them noticing. Going to jail takes on a twist, too, with players heading to the dreaded space being forced to wear a plastic handcuff.

Urging players to cheat means tweaking some of the rules. For the first time, players don’t need to designate a banker. During a player’s turn, they assume responsibilities of the bank.

The cheaters’ version of the classic board game enables players to indulge in a spot of embezzlement or even outright theft – but if they get caught the consequences are a spell in jail wearing handcuffs.

Also, some properties will see changes making them more affordable to purchase. For example, Pennsylvania Avenue is free to the first person who lands on it, while Atlantic Avenue can be purchased for roughly half its original value.

Do you suspect that your significant other is cheating? Don’t hesitate to contact Eye Spy today! We have investigators available 24 hours a day 7 days a week to discuss your case. Call us today at (888) 393-779 or learn more about us here: www.EyeSpyInvestigations.com

Should I hire a Private Detective?

Eye Spy discusses the question Should I hire a Private Detective... read more

I Digress I Digress. Has your Spouse or Significant other have digressed... read more

Listening Devices Is someone listening to your conversations? Covert listening devices can record... read more

3 Times Captain America’s Civil War could have been Avoided

Grief & Cheating Grief and loss can have a huge impact on... read more

Ohhh I'm Telling Are you sick of dealing with a Tattle Tell? Ohhh... read more

If you think someone is watching you, you could be right.

If you think someone is watching you, you could be right.... read more